On average, Israeli forces and settlers killed 6 Palestinian children per month this year.

Israeli forces and armed Israeli civilians have killed 78 Palestinian minors in the occupied West Bank and besieged Gaza, making 2021 the deadliest year on record for Palestinian children since 2014. 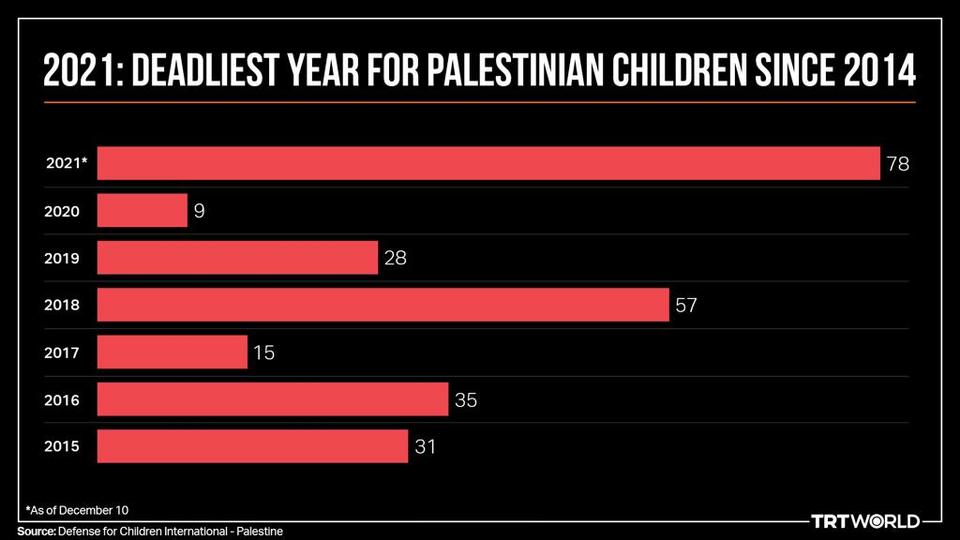 The documentation gathered by a local Palestinian child rights organisation showed that Israeli forces shot and killed 17 Palestinian children with live ammunition, 15 of those in the occupied West Bank and two in Gaza.

At least nine Palestinian children were shot and killed in the context of demonstrations or confrontations with Israeli forces and did not present a direct threat to life or of serious injury when they were shot, it said.

Intentional lethal force is only justified in circumstances where a direct threat to life or of serious injury is present, according to international law.

“However, investigations and evidence collected by DCIP regularly suggest that Israeli forces use lethal force against Palestinian children in circumstances that may amount to extrajudicial or wilful killings,” the group said.

Most recently, 15-year-old Mohammad Nidal Younis Mousa lost his life on December 6, hours after a private Israeli security guard shot him after he had allegedly committed a car-ramming attack at an Israeli military checkpoint near Tulkarem.

‘Children killed in their beds’

Israeli forces killed 60 Palestinian children during Israel’s military aggression on Gaza in May 2021, dubbed Operation Guardian of the Walls, the organisation said.

An Israeli air strike killed six children on May 10, the first day of the assault, in Beit Hanoon in northern Gaza.

Another ten children were also injured in the same air strike.

One Palestinian child was killed by an unexploded ordnance, the origins of which could not be determined, according to the documentation.

Israeli forces killed Palestinian children using tank-fired shells, live ammunition, and missiles dropped from weaponised drones and US-sourced warplanes and Apache helicopters during the military assault, according to the report.

The investigation also noted that seven Palestinian children were killed by rockets misfired by Palestinian armed groups within Gaza during the escalation of violence in May, bringing the total number of children killed to 86.

Israeli agression began on May 10 after Palestinians protested against Israel’s heavy-handed policing of the Al Aqsa Mosque compound, built on a contested site sacred to Jews and Muslims, and the threatened eviction of dozens of Palestinian families by Jewish settlers in a nearby neighborhood.

The 11-day air, land and sea assault on Gaza killed at least 250 and injured almost 2,000 Palestinians.

International humanitarian law prohibits indiscriminate and disproportionate attacks. “Israel as the occupying force in Palestine is required to protect the Palestinian civilian population from violence,” the organisation said.

The rights group stated that 2,198 Palestinian children have been killed as a result of Israeli military and settler presence in the Palestinian territories since 2000.

However, almost no Israeli officer or civilian has been held accountable for the deaths of these Palestinian children in these two decades. The odds that a Palestinian would see his or her complaint lead to the prosecution of a soldier who harmed them is 0.7 percent, according to a report by Yesh Din, an Israeli human rights organisation.